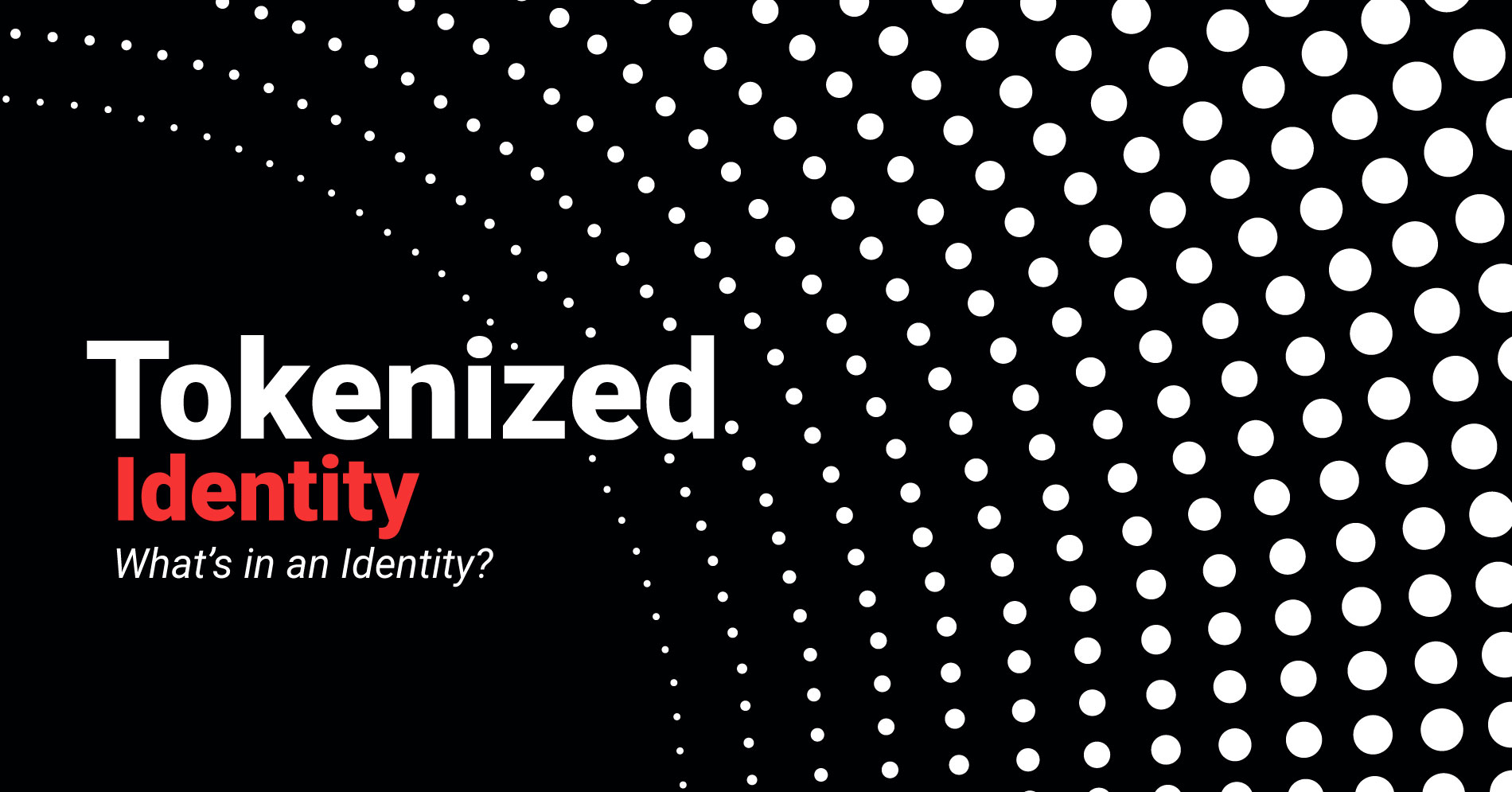 What’s in an identity? Whatever it is, can it be sold?

Special thanks to Vinay Gupta and Andy Tudhope for reviewing this article and making suggestions, though this does not indicate that the content reflects their personal opinions

We live in a society of increasingly fluid definitions. We explore the boundaries of the definitions of our most basic concepts (or lack thereof). This article attempts to describe another frontier, another definition, where this might take place. Our frontier travels will take us to diverse locations: taxes, jail, MMO games, ghostwriters, data marketplaces, DeFi Pepe anons, and more.

I’ll try to strike a balance between depth and readability. I’d like this to be accessible to the common reader, which means not diving into a lot of the nuance inherent to the topic. As such, there may be some rounded edges, some thoughts not fully developed, nuance not significantly extrapolated. If you are interested in a work that dives more fully into what identity is (and the various means it is communicated and stored), then I would recommend this essay by Vinay Gupta, and this one by Philip Sheldrake.

Identity, like so many other concepts, has been being redefined and explored. Artists of various mediums often carry a stage name, a nom de guerre. Is this any less their identity than the name that appears on their birth certificate? This becomes more pronounced in the Age of the Internet.

A person deeply invested in the persona of an online account, perhaps their gamer tag in an online multiplayer game, perhaps their anonymous face on a social media platform, can be in ways more of their defining identity than anything else for those who interact with them consistently in these forums. A multiplayer game account can be an identity, a social media account can be an identity.

Let’s connect this with another conversation, another field of definitions. What money can buy is limited only by the creativity of the seller and the desire of the buyer. Even a cursory perusal of the internet turns up a truly amazing display of creativity.
‍

Can an identity be sold?

One could argue that certain applications are more straightforward. In the technical sense, selling the access to a particular online account used as identity is fairly simple. The seller sells access to the ability to log in, and the buyer has then subsumed the identity. This does not comment on the ethics or legality of such an action, merely that “el337g@merz” remains “el337g@merz” no matter who is tapping on the keyboard behind that identity. There could be a more theoretical discussion about the definitions here, but let’s at least take that for the time being.

As a side note, the game industry in general has not been keen to embrace this definition of identity, and actively seek out and ban those who level up accounts and sell them. (You can see one anecdote from Dean Eigenmann here.) You could theoretically differentiate between someone who ‘legitimately’ creates and plays from an account (as to say that their goal in possessing the account is predicated on the recreational value of their interaction with the game for the sake of playing the game, and not for the economic benefits they can derive by doing so), but it’s worth pointing out that this is a slippery slope. What about someone who enjoys both? Who decides? As with much of the thought experiments in this article, there are more questions than answers.

Could we go farther? Theoretically, why not? Why can I not license someone else to speak in my name, present themselves as me?

To continue to play devil’s advocate with this idea, it’s worth pointing out that this happens all the time already. What is a speechwriter if not someone licensed to put their words in someone else’s mouth? The words come from the writer but are now attached to the speaker.
‍

Ghostwriters are a similar group - their words are now publicized under a different identity. Interestingly, here the economics are reversed; the speechwriter and ghostwriter do not pay to license an identity, they are paid to generate content for it. Not only can you pay for an identity, in the spirit of Ransom of Red Chief, you can also be paid to take it.

There would have to be limits as to how far an identity can be shared. Licensing someone’s driver’s license, for instance, has the very real potential of harming life and limb. Licensing identity for a passport might allow criminals to move across borders with more ease. Insurance premiums could be unethically bypassed. We would need some level of definition of the social contract for when an identity is malleable to diverse entities, and when it is restricted to one particular human body (or to other options).

An interesting area of nuance would be the relevance of licensing an identity to interpersonal relationships. If I am friends with Joe, and Joe licenses his identity to someone else (who for simplicity’s sake I’ll call Joe2), it doesn’t mean I have to want to cover Joe2’s half of the pizza by lunch, or even go to pizza with him (/her/they) at all. Joe has no intrinsic right by which I must do pizza with him. If Joe (the Original Joe) is in some kind of funk and is awful to be around, I might not do lunch with him, there’s obviously no obligation to do lunch with him when he’s someone else. In short, it would likely not be amazingly relevant.

It could be relevant to the financial aspects of a relationship. Perhaps a woman could tokenize her identity vis a vis her prenup, allowing another to claim part of her prenup (if relevant) as her. Similar applications might include life insurance and inheritance.

Monetary Law and Beyond

Perhaps the widest applications are monetary. Tokenizing the right to utilize a bank account as the owner, for example. There may be interesting tax ramifications. Someone looking to avoid certain forms of taxation may be able to license the identity of someone under the poverty line. Instead of finding a country as a tax haven, perhaps people themselves could become tax-havens. (This is not meant as a comment on the ethical validity of tax havens, or of a lack thereof. Tax havens are a reality, and their usage is too, whether ethical or not.)

It would be interesting to see how far this concept could go. In an example that could perhaps be perceived as extremely libertarian, could it be legitimate to let a convicted criminal tokenize his identity with regards to the time they must serve, and pay off whoever would be willing to bear that burden for them? In other words, they would not personally serve the time, rather someone bearing their identity. On the one hand, it may seem unjust that the physical person that committed the crime is not behind bars, but on the other, if we can trust the market to be efficient, they will pay the cash value of serving that time (in order to have someone take their identity and serve the time). In essence, they have personally received their punishment, just financially (and in the process enriching someone else) instead of through actual incarceration. This should not be applied to criminals who are actively and consistently a threat to society, who may need to be incarcerated to protect society, and not merely as a punitive measure.
‍

This concept may cause outrage. Imagine a billionaire accused of millions of tax fraud, sentenced to thirty years, who pays off an underprivileged parent who wants their child to have a chance $25 million to sit the 30 years for them. We may feel indignation, but does that mean we should stop the parent from performing a transaction they are walking into willingly? Is there a social contract that insists on the punitive measure being the criminal “themself” being incarcerated? Is it worth taking the money, the chance at a better education, daily hot meals, and more from the child?

The effects on the data marketplace could also be interesting in a number of vectors. From the side of the data aggregators, it might allow an avenue to data collection barred by regulations like GDPR, or allow freedom to decentralized platforms that have struggled with their place in a GDPR world. By licensing the platform (or a facet of it) to act as the identity of the user, the platform might be able to operate in ways they would otherwise not be able to. From the other side, if a number of entities operate under one identity it could be used as an obfuscation technique against profiling through data collection. As is common in the world of data, the same innovation may be able to be used both to hinder and help privacy.

A New Take on Becoming a Corpo

Using these principles, there’s no reason why a corporation couldn’t tokenize its identity. Maybe by owning such an identity token tax rights could change, for instance the country the company is considered incorporated in for tax purposes. Maybe they could be a new form of licensing proprietary information, with certain identity tokens identifying the bearer as the corporation for the purposes of leveraging the patented and/or proprietary assets of the corporation. A keen eye will see that these avenues are not restricted to a company, but are also applicable to an individual. In truth, a company is another vector of identity, like we mentioned above.

The blockchain space, in particular, in particular has a number of entities known not by their legal name nor a nickname tied to it, but rather by a pseudonym. The inventor(s) of Bitcoin went by the pseudonym Satoshi Nakamoto, for example. DeFi especially has many beloved (and reviled) anonymous figures, many represented by Pepes or other pop culture icons. Tokenized identity may have interesting applications in these identities obfuscating themselves, preventing unwanted linking between legal identities and their pseudonym. By licensing out the right to leverage the pseudonym, the creator of the identity may be able to further obfuscate which actions performed by the identity relate to them.

One theme throughout this exploration is more questions than answers. While the article aims at being readable and brief, a number of the definitions and concepts within are questionable, need to be refined further, and are full of a high level of nuance. Are these concepts that the social contract can embrace? Perhaps some of them already are. We accept that works of a ghostwriter are not identity theft or fraud, for example. How far should these concepts be taken? What are the legal and ethical ramifications? The only way we can find out is through discussion and debate. This is not meant to be an exhaustive exploration of this topic by any means, more an initial foray into identifying the concept in the first place. Perhaps this can spark further thought, discussion, and innovation.